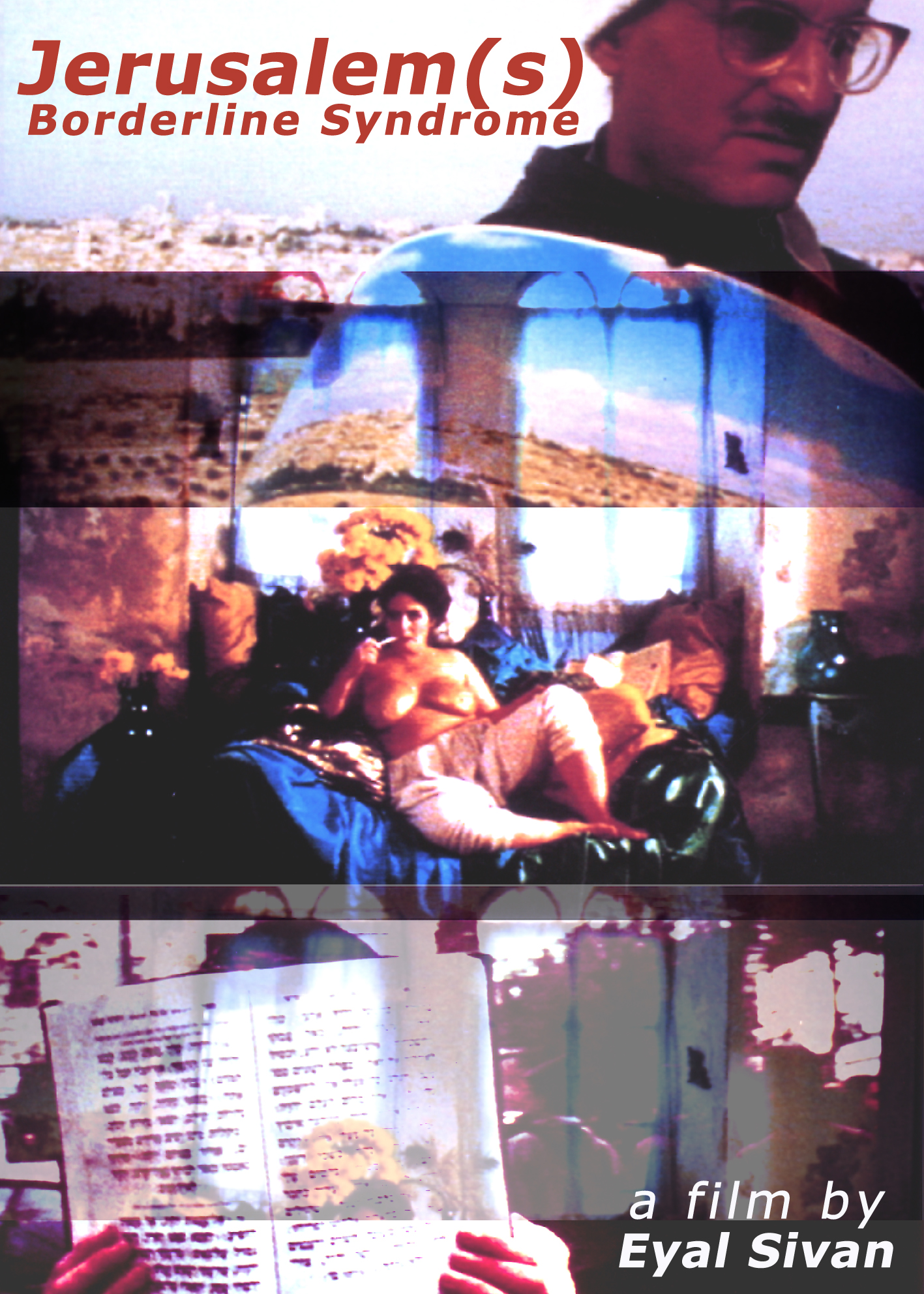 At the beginning of 20th century, a particular form of hysteria was discovered, known as “Jerusalem Fever”, which affected pilgrims visiting the Holy City. A camera wanders in Jerusalem in search of a new approach. Late at night, a child wanders through the streets of Jerusalem in search of the woman with golden breasts that once glimpsed.

This iconoclastic film, midway between fiction and documentary, explores the "over-sacred" side of Jerusalem. A political gamble for its inhabitants, a myth for its visitors, Jerusalem remains a universal object of desire that borders on fetishism. The film takes its inspiration from the Jerusalem Syndrome, a psychiatric syndrome, officially recognised in the 19th century, and from which the pilgrims and tourists that visited the Holy City suffered. A camera visits Jerusalem looking for a new approach to show the city. In parallel a young boy wanders the streets and discovers one night a prostitute with golden breasts. The boy, as does the camera, becomes a victim of a violently feminine Jerusalem.

At the beginning of this century, a particular form of hysteria was discovered, known as “Jerusalem Fever”, which affected pilgrims visiting the Holy City. This syndrome is perhaps one of the city’s underlying truths.

Jerusalem(s) Borderline Syndrome, analyses the often irrational relationship that men and women sometimes have with an object, an image or a symbol. Late at night, a child wanders through the streets of Jerusalem in search of the woman with golden breasts that once glimpsed.

In parallel, the camera, a character in its own right, investigates the daily reality of this divided city. It runs into invisible borders and, from fear of filming things that have already been filmed a thousand times, tries, without really succeeding, to escape the Jerusalem syndrome.

The Jerusalem Syndrome: a psychiatric syndrome, officially recognised in the 19th century, and from which the pilgrims and tourists that visited the Holy City suffered.

This iconoclastic film, midway betwen fiction and documentary, explores the "over-sacred" side of Jerusalem. A political gamble for its inhabitants, a myth for its visitors, Jerusalem remains the universal object of desire that borders on fetichism.

A camera visits Jerusalem looking for a new approach and in paralell a young boy wanders the streets and discovers one night a prostitute with golden breasts.

The boy, as does the camera, become victims of a violently feminine Jerusalem...

Some notes about the film... based on a text by Dan Dulberger

Every war imbues certain objects, signs or places with an importance not necessarily proportional to their primary strategic value. Having thus been imbued, such fetishes then serve as irrational reservoirs of attraction, obsession, and the inevitable clash between generations of conflicting parties.

Jerusalem is (since it has always been part of people’s fantasy) the fetish of the conflict between the European and Middle Eastern cultures. As the tension between the Muslim and the (now Judeo)-Christian worlds re-surfaces, the Jerusalem fetish is expected to reaffirm its archetypal influence on the antagonists’ sense of identity, purpose and mutual difference.

The Jerusalem fetish consists of a dome, a wall and a sepulchre. Within these competing architectures is embodied the perpetuation of their self-differentiation through the infantile fantasy of possessing something all to oneself. Jerusalem itself has faded into insignificance behind the icons of a much disputed prize.

In this context, a documentary film about Jerusalem is, by definition, impossible. Aiming for an “authentic” image, in an existentialist sense, of whatever Jerusalem(s) “there” may be “out there”, the film finds itself confronted with manufactured images. All that remains to be done, is to render a picture of a picture. Not being able to penetrate the thick gloss of the image, we lose sight of the distinction between image and reality. One’s vision is constrained by the pre-existing image.

Since it is confronted from the start with a fetishist image, not with a reality to be imagined, all the camera can do is de-compose and de-fetishise it. All the freedom it has in such a situation derives from the act of taking the image apart, de-processing it back into the chaotic, primeval, fleeting stimulus.

It is a liberation of reality from the tyranny of the politicised image.

The Jerusalem archetype is feminine, maternal - the dome is a breast. There is a constant rape of the symbol. The myriad offspring of Jerusalem the whore, come to convince her with their flattery that she should recognise each of them as her only son. But no-one is the only son. She has many. The living are of no importance to her. Jerusalem is a necrocracy. A city of the dead. The place of legitimate irrational resurrection for both religions.

The dual image - east-west - has actually taken over its referent. It is impossible today to form an impression of the city independently from this dual image. The image totally controls the field of vision of this city. It camouflages the city itself. Scratch the golden painted surface and you will discover its invisibility.

"A totally new atmosphere currently reigns over Jerusalem. For the first time in its bloody history, the City will perhaps soon live up to its mythical, and previously fictitious, name of “Jerusalem, City of Peace”. The politics surrounding the City may be no longer impede our vision. Today, just as everything suggests that the City will at last regain a peaceful existence, I want her to explain the mysterious adoration she enjoys.

More than a physical entity, Jerusalem is often perceived as a concept. Any talk about the city, any observation about the place becomes a way of appropriating it. But the city, like a teasingly seductive woman, shies away from those who would possess her. A visitor passing through may leave with a sense of satisfaction, perhaps due to the illusion of having fulfilled a fantasy. But the city’s inhabitants, who do not perceive it as a vast site of worship, are consciously frustrated. In the shadow of the myth, in the largest living museum of all time, it is very difficult for them to maintain their human dimension. Passionate, they sometimes prefer self-exile rather than to suffer this one-way love affair.

This is why I left Jerusalem, ten years ago.

This is the fulfilment of a fantasy, an act made possible only through film.

Jerusalem can tell her own story about the irrational love that mankind has for her, through archive footage, and present day film. Jerusalem is like a woman lying on a psychiatrist’s couch.

Seized with fear of filming over-cliched images, the camera tries hard, right up to the last scene, to fight the destiny that draws it irresistibly towards the couch.

Showing one’s home city, when it is a city like Jerusalem, not that there can be another like it, is to show an object of adoration and worship. Neither a tourist film, nor an historical presentation, nor a political investigation, rather a film made with the City as its starting point. The memory of how I saw the City as a child living there, a view neither too close, nor too distant, neither too hot nor too cold, not cynical, a film with a light sense of humour. The current research of an adult against the grain.

From East to West, she is observed. The whole world is in her possession. Her photo, as that of a lost wife or mother, hangs on walls, all over the world.

She had three lovers. The first took his son to slaughter; she kept her silence, in complicity. The second was tortured, crucified, she was stained by his blood; she remained imperturbable. The third left her on a white horse, he rose to heaven; and then her breasts were painted gold.

Three sons, of an unknown, unseen and indescribable yet ever present father, identified her as their mother.

“How did you become a whore, you the city of faith, home to thieves and murderers?” lamented the prophet Isaiah. King Solomon, who wrote The Song of Songs, admired her good looks. She has been in constant transformation, calm and golden, proud and solitary, seventeen times raped, twenty times ravaged, then rebuilt, dressed anew, ever more imposing, more beautiful, more courted. “Let us conquer her”, vaunted the Crusaders, “It is on her, in possessing her, that we shall find our deliverance.”

One day, at the corner of a narrow alley, through a barred window, in a vaulted room, a body was sprawled on the bed, the abused body hidden under layers of once sumptuous make-up, a large lady with golden breasts.

To think of yet another film about this place, about this geographic area, about this landscape, about this city, that perhaps exists only on postcards. To think that it is possible to add another image of this, the city of all clichés. An awesome project.

Jerusalem, city of historical symbols, city of the mad, city of the kitsch, necropolis of all passions. I return to Jerusalem to find my way, to find the view which, I hope, will take me to this woman, to shatter an illusion of my childhood.
Or perhaps not.”

A violence and a tension indicate us our presence in Jerusalem.

An ironical metaphore about a town overcome with a mad destiny.

The harshness of Eyal Sivan' eyes will give the shivers to more than one. His portrait of love and hatred, between attraction and repulsion, is worth a watch, if only because he takes the liberty of raising against the spiritually correct cliché of "holy city".