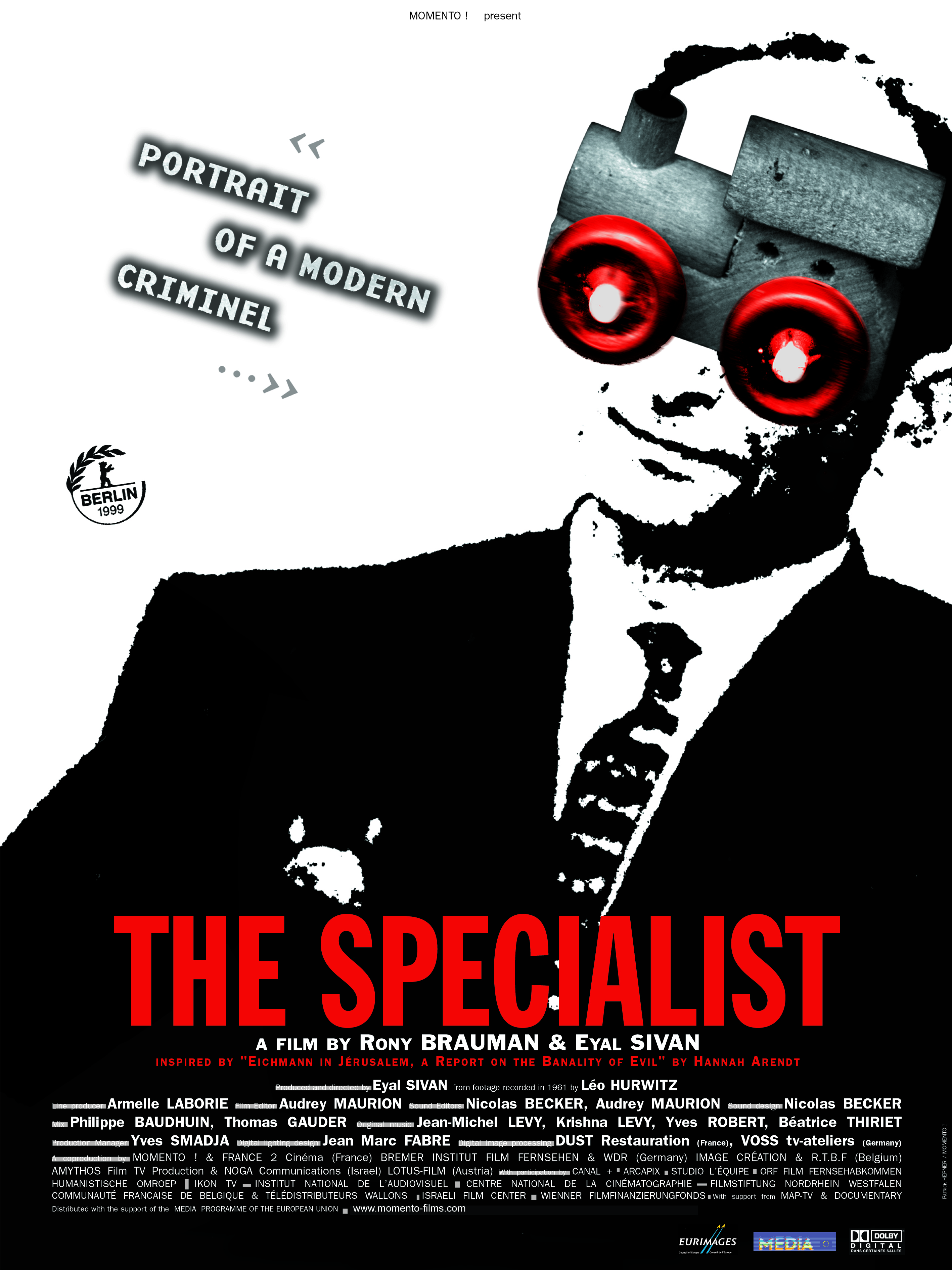 50 years after the Eichmann trial (Jerusalem, 1961), watch the film about "the extraordinary trial of a terribly ordinary man". It is an essay on obedience and responsibility, inspired by Eichmann in Jerusalem, a Report on the Banality of Evil written by Hannah Arendt, and directed by Eyal Sivan out of 350 hours of archives.

The Specialist is a courtroom drama painting the portrait of a zealous bureaucrat who has immense respect for the Law and hierarchy, a police official responsible of the elimination of several million people, a modern criminal.

The prosecution describes the accused as a blood-thirsty pervert, the Machiavellian liar and a serial-killer yet he appears as a quiet family man, both comic and terrifying in his banality. Although he doesn't deny the role he played in the criminal enterprise that he belonged to, he shelters behind the instructions of his superiors, his vow of allegiance and the obligation of obey orders.

He considers that his role as a mere agent, a purely administrative and logistic one, devoid of all passion, shelters him from the justice of men, even through it may not exempt him from all responsibility.

The accused, Adolf Eichmann, is a man of average height, in his fifties, shortsighted, nearly bald and wracked by nervous tics. Throughout his trial, he sits in a glass box, surrounded by neat piles of documents that he ceaselessly notes, re-reads and leafs through. An expert on emigration and specialist in the "Jewish issue", responsible for the transportation of "racial deportees" to the Nazis camps between 1941 and 1945, he describes his work with suffocating bureaucratic precision. Before the court and the witnesses who survived the hell that he consigned them to, he admits to having provided the death factories with human convoys for destruction. He struggles to show the conflict between his duty and his conscience and insists on the fact that no one can accuse him of having done his job badly.

Intoxicated on the dizziness of his own powerlessness, the accused describes himself as "a drop in the ocean, an instrument in the hands of superior forces". If he hadn't done it, he says, someone else would have done it instead.

The contrast between the monstrous nature of the crime and the mediocrity of the accused is immediately striking and becomes even more apparent during the thirteen scenes making up this documentary feature, revealing the portrait of a terrifyingly ordinary man.

The Specialist is composed exclusively of the previously unseen 350 hours of footage recorded during the dramatic trial of the Nazi war criminal Adolf Eichmann, in Jerusalem in 1961. This film about obedience and responsibility portrays a specialist of problems solving, a modern criminal.

For all the questions it raises, The Specialist is an essential film, a work dusting people's conscience.

Eyal Sivan sketches a masterful reflection about disobedience-know-how as an essential component of our humanity.

The Specialist is an exemplary reflection on the banality of absolute evil.

The Specialist is a philosophical essay which clearly shows that cinema can be a tool for reflection and not just a vehicle for emotions. More than it is a duty to remember, it is a duty to think that the authors, Rony Brauman and Eyal Sivan, inspire; they wish to break the emotional opposition between the executioner and victim in order to lead us to consider what Hannah Arendt called "the banality of evil". (…) they claim the complete exercise of intelligence in order to reveal the deep structures of the human mind and of modern societies.

You should watch The Specialist by Rony Brauman and Eyal Sivan. Watch and debate.

A (philosophical) film of the family of films with no family that invents a new form of history thinking, at a key moment in history.

Without hesitation, The Specialist may be the most important film made about the hitlerian "machine".